For those who love concerts and the opera, there is a variety of theatres that are reachable in approximately an hour from Villa Mimma. 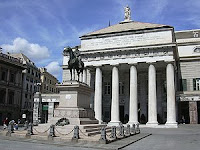 Here I would like to point the attention to the theatre in Genoa, the "Carlo Felice". This is a new theatre that was rebuilt after the original theatre was bombarded during the Second World War, as nicely described on the theatre's website.

Its fame is due to the fact that the

inside is like being in a "covered" square. The photo shown in the main website doesn't give you the full feeling, so why not taking a trip there?

The calendar for the 2008/2009 season can be found through the following links:
- Opera and ballet;
- Symphonic season.

If you attend any event or if you visit this unique theatre, please do let me know and I'd love to see some recent pictures.

September in festival - Food and Wine

On the weekend of the 13th/14th of September in Asti there is the Festival Delle Sagre, where the big Campo del Palio (the square that hosts the traditional horse racing event - this year on the 21st of September) hosts stalls from about 50 local towns, where you can sample the food and wine of the region. On Sunday there is also a parade with floats representing traditional farm themes. The official website is in Italian!, but it can give you an idea of what to expect.

Also, in Asti there is the Douja d'Or wine festival from the 12th to the 21st of September, where you can sample around 400 local wines (you can also buy them!). Some information in English can be found on the world events guide.

The traditional festival of the "Palio di Asti" is getting closer again.

The medieval town of Asti is hosting its renowned Palio on Sunday the 21st of September, although celebrations will start on the Friday and Saturday before then. Music, food, wine, market stalls, parades, fireworks... will be part of the fun.

The first notion of the Palio goes back to 1275, so it has been around for quite a few centuries.
Don't miss the opportunity to take part in it if you are in Piedmont at the right time!
Posted by Villa Mimma at 15:45 No comments: