"Light footsteps as the traces of the animals that disappear with the wind or with a few drops of rain,
Light footsteps as those that everyone of us should leave behind ourselves but that become deep sulci in everyday life"
See the website http://www.ormelievi.it/ for further information.

Today we went to see the Holy Shroud in Turin. We left Villa Mimma around 10:30am, with rack-sack with sandwiches and water prepared by Paola for us. We parked in Casale Monferrato station and were lucky enough to find a free parking space. Buying the train ticket to Turin was quite an adventure in itself as the station machine was broken. Nevertheless we made it! We boarded a coach that took us straight to Vercelli where we could then take a train to Turin. 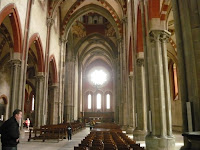 In Vercelli we had 30 minutes to spare so we took the chance to stroll to the Cathedral of Saint Andrew, a Romanic-Gothic church. The red, green and grey marbles and stones used for its interior and exteriors make an impressive church worth seeing it. The cloister is also open to the public and it was restored for the millennium. 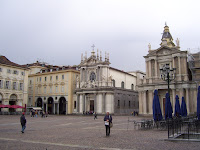 Once in Turin (at around 1pm), after a pleasant train journey from Vercelli, we strolled under the galleries that are on the side of Piazza Carlo Felice, Via Roma, Piazza San Carlo (which is the centre of Turin life), until we reached Piazza Castello. We passed many fashion shops and cafes, selling the renowned chocolate of Turin! 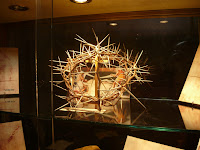 In the church of San Lorenzo, at the corner of Piazza Castello, we could appreciate the Shroud through pictures and historical notes. This was excellent as the children could see it and I had the time to point features out to them. I was worried about their interest for it, but they were really keen to know about the scientific proofs of the authenticity of the Shroud and the extreme similarities between the signs of the Shroud and the recount of the crucifixion by the Gospels.
We had time to stroll to the gardens by the Royal palace and find a playground before joining the queue to see the Shroud. We had booked to see it at 4:30 pm, joined the path that led to it at 4pm and hardly stopped at all in our walk towards it. Time passed incredibly fast as the walk develops under a structure build for it with paintings of the life of Jesus through history. Then the path takes you above some excavations of a Roman Theatre, until you reach the final point where you join a group to see a presentation of the Shroud and its signs. After this, you are asked to enter the Guarini Chapel built in 1694 for the Shroud.
The silence and devotion of the people in the church are certainly catching and the emotion for seeing something so real is overwhelming. Whether you believe that it was Jesus wrapped in that cloth or not, it is still unbelievable what the man of the shroud must have suffered and the sense of dignity and respect that the figure inspires when you stand by it.
Overall it took us about 45 minutes to go through and it certainly wasn't that ordeal of queueing and waiting that we expected, even for the children.
Tickets to see the Holy Shroud: http://www.sindone.org/
Train connections to Turin: http://www.ferroviedellostato.it/
Accommodation at Villa Mimma email info@villamimma.com
(20% discount on accommodation and train tickets with bookings to see the Holy Shroud).
Posted by Villa Mimma at 13:23 No comments:

Saturday 27th of March Villa Mimma had the pleasure of hosting the writer Angelo Petrosino for a meeting organised by the village library for the children of the primary schools of Treville and the area.

The writer, who lived for many years abroad, first in Paris and then in Cornwall, has engaged the children immediately thanks to his nice and joyful nature, trying to make them understand how useful it is to pay attention to all that surrounds us.

Answering the many questions that the young audience asked him, in particular about how to become a writer, he explained how he listens to the silence and watches with careful eyes the little things of everyday life . You don't need wizards, witches, super-heroes to give life to his books because there you can only find true and lively characters who may be are a little bit noughty!

The adventures of Valentina, the main character of 70 + books that he wrote, are the cleardemonstration of the success that his stories meet amongst children of all around Italy.
Discover more about this great author on his website: http://www.angelopetrosino.com/
.
Posted by Villa Mimma at 14:06 No comments: